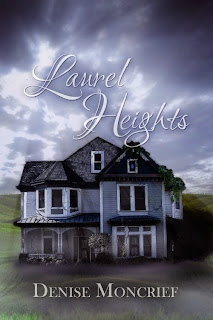 A dark cloud of deceit hovers over her family tree...

Left an estate by an aunt she’s never met, Laurel Standridge takes possession of Laurel Heights, hoping it will be the safe haven she needs to recuperate from her ill-fated relationship with Rand Peterson. Secrets long buried rise to the surface when her cousin James is murdered and dumped on the highway just outside the gates of Laurel Heights.

Her past trails her to the mountains of Arkansas...

Caught in an obligation Chase Peterson feels he cannot ignore, he agrees to help his brother Rand take back the property he believes Laurel stole from him, but Chase remains at Laurel Heights after he discovers Laurel took nothing of Rand’s away with her except nightmares, fading bruises, and a broken rib.

Unexplained disturbances shatter her hopes of a normal life...

Are the strange bumps, thumps, and bangs reverberating through the night caused by the murderer of Laurel’s cousin James, someone Rand has sent to exact his revenge, or a disturbed soul existing in another dimension, trying to communicate with the living? Drawn together by the intrigue surrounding Laurel Heights, Chase and Laurel become hopelessly entangled in a relationship that goes deeper than lust.

Can their love survive the haunting of Laurel Heights?

The digital version of Laurel Heights is always priced at just 99¢. Here's an excerpt:

She had wanted to come back alone ever since the cop searched the garage. A piece of furniture stored in the far corner that had a bright blue tarp dangling from the top, half on, half off, had caught her attention. Why had Celeste put such a priceless antique in the garage? It wasn’t the pricelessness or the antiquity of the armoire that had drawn her attention though. The armoire—or one just like it—had been a central element in her dreams many times. No, in her nightmares. She opened the door and peeked inside. Three small drawers clustered at the bottom left just as she remembered from her dreams. She pulled the bottom drawer out and gasped in surprise.

She withdrew first one picture and then another—the same pictures that inhabited her dreamscape. It was as if they had dropped from her nightmares into her hands, but she knew she wasn’t dreaming. In shock, she watched as the pictures fell onto the floor of the garage. She wasn’t sure how long she stood there, staring at nothing in particular.

Night had fallen before she bent to retrieve the photos from the dusty floor. The shaking began in her extremities. How long had she been in shock? Too stunned to move? Would she start screaming in terror soon? Her cries for help always shook her out of the nightmare.

The urgent need to escape pulsed in every fiber of her being. She turned to leave just before the garage door slammed shut. The loud bang caused her to jump. The only illumination in the room wavered from the flashlight. Suddenly, it didn’t seem like enough. She willed her stubborn legs to move toward the door and the relative safety outside in the waning evening light, longing for the warmth of her kitchen and the sound of Chase’s off-key caterwauling. She couldn’t get to the garage door fast enough. To her dismay, it wouldn’t budge. In a frenzy, she pushed on the flimsy wood, losing control quickly. Panic seized her from the inside out.

Memories long buried rushed her—kicks, punches, and slaps—things that only happened in locked garages. She felt the pain as surely as if someone was beating her, even though she was alone. Her fears wouldn’t stop pummeling her overwrought psyche. She crumpled to the floor, whimpering and covering her head with her hands. “Don’t hit me.”

Chase’s voice seemed to come from a far off place, low and indistinct. “Laurel.” He reached for her, but his touch pushed her further into hysteria. “Laurel, it’s me, Chase.” She pushed his hands off, backing away from him in terror.

“Stop…hitting…me.” She gasped a ragged breath with each word.

“I’m not hitting you. Stop screaming.”

Her eyes finally focused, and her mind cleared. “Chase?”

He was kneeling beside her, a concerned look on his face.

“I…I…” She couldn’t get her words past her swollen throat. “Panic attack.”

He pulled her into an embrace. “What are you doing out here alone?”

“I wanted to…” She didn’t want to talk about the armoire, the pictures, or the dreams. “I needed to see for myself.” A cryptic comment, considering she hadn’t explained anything to him.

“I was just remembering…”

The alarm on his face almost made her forget the tension between them. Sudden understanding erupted in his eyes. “Did something bad happen to you in a garage?”

She shook her head. Not because he was wrong, but because she couldn’t face his questioning gaze. The memories surfacing sent waves of shock through her. Rand wasn’t the first to lock her in a garage and beat the crap out of her. Who had done that to her? The trauma tried to emerge, but perhaps too many years of repressing the pain had driven the event deep into her subconscious. The almost recollection receded and dimmed.

Laurel Heights is the first book in my Haunted Hearts series.

Please check out my published works at:

You might also enjoy my free short story, Ghost In the Garden, available here:

Posted by Denise Moncrief at 8:38 AM