What does a woman do when her man is perfect in every way...except he has a little problem with commitment? 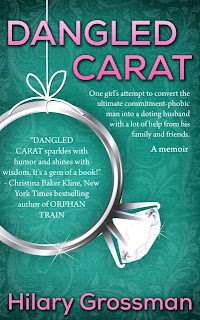 In this relatable, lighthearted, and playful memoir, Hilary reminisces about her life before Marc—from the insecure and awkward teenage years she spent in a back brace and dealing with the loss of her father, to her early relationships and, finally, to the day she met Marc and realized that she really wanted to see him again. Through their first date—even though Hilary was technically seeing someone else at the time—and the ease of their early time together until Marc first decided that they were moving too quickly, up until that fateful New Year’s Eve, Hilary shares the details of their relationship and how Marc’s inability to commit led her to find an inner strength and confidence she didn’t know she possessed.

For anyone who has ever dated a commitment-phobe, who has found their patience wearing thin with the one they love, or who has sat around wondering if he is ever going to pop the question while trying to remain the very picture of patience and grace, Hilary's humorous and honest story will hit home.

Disclosure: The author gave me a free copy of this book in exchange for an honest review.

Hilary has an easy, flowing writing style that made reading her story a real pleasure. I often found myself smiling, laughing, crying, and getting mad right along with her. By the end of the book, I was rooting for this couple to make the marriage commitment (even though I was well aware of the ending). Marc seems like a wonderful man and Hilary seems like a very patient woman. Their story is real, not the figment of a novelist's imagination, which makes the telling even more priceless. Hilary adds such detail to every scene that I feel as if I'm right in the middle of their lives. A very brave and public way to express her love for Marc.

When she's not writing, Hilary Grossman is also the CFO of a beverage alcohol importer and lives on Long Island.

In connection with the release of her debut book, Hilary is sponsoring a Giveaway. To one lucky winner she will be giving away one signed copy of dangled carat, one CD (when you believe) by Sandi Rose, and a $25 gift certificate to Victoria Secret.

a Rafflecopter giveaway
Posted by Denise Moncrief at 1:00 AM 2 comments:

Each Sunday, Weekend Writing Warriors hosts a fun new blog hop. If you would like to participate, link to the list at http://www.wewriwa.com/ and post eight sentences from a published or unpublished work to your blog on Sunday. Follow the same link on Sunday to read excerpts from other authors. 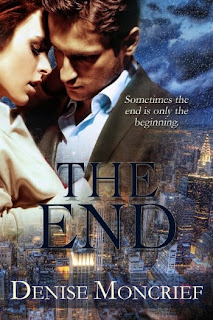 This week's eight comes from my recently released romantic suspense novel, The End. Here's the set up... Ellie's husband, Tab, a part-time writer, part-time cabbie, has been dead almost a year.

I’d put the idea of reading his final words aside, but then I couldn’t stand it anymore. I had to read what he left behind.

When I opened the file, I expected to read something sentimental and just a little cheesy, something with a made-for-television happy ending. I expected to cry like a baby when I read his final words. Tab was the most dramatic man I’d ever met.

Instead, I became engrossed in a thriller that read so real I wondered if he had written a true story. All the plot needed was a realistic ending.

And the end came to me in the middle of the night.

Sometimes the end is only the beginning...

Almost a year after her husband dies, Ellie Marston opens the file for Tab’s last manuscript, a thriller so compelling it reads like a true story. His manuscript needs an ending, so Ellie writes the obvious conclusion. The same morning she types The End, her career as an assistant district attorney falls apart. Accused of throwing the high profile Patterson case, she resigns in disgrace. The only friend she has left in the criminal justice system is Det. Paul Santiago, a man she has worked closely with on numerous cases. While she was married to Tab, she squashed her growing feelings for Paul, determined to make her deteriorating marriage work, but circumstances after Tab’s death bring Ellie and Paul together.

Ellie’s paranoia increases as she becomes convinced Patterson is harassing her, certain that someone is searching her belongings for any hidden evidence she might have that would reopen his case. It becomes clear there was a conspiracy to release Patterson. She seeks help from her former co-worker, Presley Sinclair, but soon discovers Presley is deeply involved in the subsequent cover up. Worse yet, Tab’s affair with Presley drew him into the twisted conspiracy as well.

Together Paul and Ellie attempt to uncover the conspiracy in the District Attorney’s office, the set up that forced her to resign. The key to the mystery is hidden in the pages of Tab’s manuscript. Once Paul and Ellie come to the correct conclusion—Tab’s manuscript is a true story and Ellie’s added ending is the only logical outcome—Ellie attempts to reveal Patterson’s hidden partner in the District Attorney’s office, but the co-conspirator she uncovers is not whom she suspects. Danger swirls around her as she steps further and further into the conspirator’s trap.

I hope you enjoyed the eight and the blurb. The End is only 2.99, that's less than the cost of a gallon of gasoline. Less than a gallon of milk. Click on the book cover above for the purchase link.
Posted by Denise Moncrief at 10:17 PM 19 comments: