My wonderful blog friend, Brenda Youngerman, passed on this award to me. Thanks, Brenda!


The Fabulous Blogger Ribbon... and here are the rules! 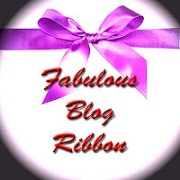 Five of my most fabulous moments:
1. When I asked my husband to marry me. (Really! I asked him!)
2. When my daughter was born.
3. When my son was born.
4. When I got the e-mail that my first short story had been contracted for publication.
5. When I saw Mt. Rainier in person. (One day I'll post this story.)


Five fabulous bloggers who've been wonderful and encouraging to me as a writer and blogger.
1. Ingrid Michaels at www.ingridmichaelsromance.com
2. Carmen DeSousa at www.carmendesousa.com
3. Megan at www.meganblogs.com
4. Andrea from www.fromthesol.blogspot.com
5. Hilary from www.feelingbeachie.com 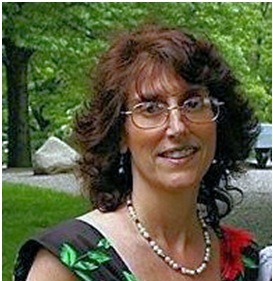 Fiction with a Purpose….what does that really mean? To me it means picking up a book – a fictionalized tale of something that could possibly happen in real life – and learning something without realizing you are. I’m not really sure when I started writing that was my intent, but it has certainly become my purpose since then. With seven books under my belt and two in process I feel that I am now responsible for writing a tale that lingers with my readers.

I have long been an observer of people, but since writing I have become a much more avid observer of the human condition and things that people do to each other – intentionally or not – that slowly chisel away at confidences. I have discovered that there are two very different types of people: those who get it, and those who don’t. It is very difficult for a lot of people to empathize with others regarding difficult situations they have no experience with. I find that these are the situations that intrigue me enough to write a story about.

In my first few novels I was immersed in the injustices surrounding all forms of domestic abuse. They encompassed emotional, sexual, and verbal abuse. I then went on to alcohol and drug abuse as well as child abuse. I have found that most of my writing includes a set of parents that literally need to be shaken into reality as I firmly believe that it is a parent’s responsibility to do right by their children. I think it is fair to say that I throw my own little morality judgments into each book I write, albeit they are often masked.

I love to learn new things and I try to make each new novel represent a new crescendo for me. In Disrupted Lives I delved into the societal angle of life in the South, and I have never even been there! In Skewered Halo I looked into the psyche of a sociopath and ended up creating such a villainous character that my readers are requesting a sequel! 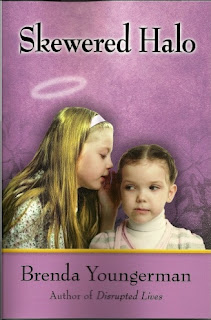 Writing to me is a creative outlet that enables me to verbalize what I cannot otherwise say. I am typically a quiet person who does not insert herself into a conversation. As a child my opinion was not valued and I suppose this is my way of making my opinions heard.

I love hearing from my readers and I am always open for suggestions. Please drop me a note after you’ve read any of my books – or even if you just want to have a discussion about a subject. I always write back! If you would like to have an autographed copy of any of my books please come by and visit my website – you can order directly from there.

Thank you so much for having me here today.

Here is an excerpt from Skewered Halo:

She slowly wound herself down the hall to the bedrooms. The first door on the right was her son’s room. Tyler had been an angel from the moment he was born. Nothing and no one could ever put out his light. Just watching his wonderment at life could crack even the hardest of shells. No one ever walked away from Tyler without a smile on their face.

When Kyle came along a year later, Tyler welcomed him with open arms, and the boys were inseparable. The room for one immediately became a room for two. Bath time became playtime. She crossed the hall to the tiny bathroom and could picture the two of them playing in the tub. Tears crept into her eyes, and she just let them fall.

She continued her journey to the next bedroom. The bed was made with a pink-ruffled spread, and there were animals waiting on the pillow. Those animals were going to have to wait for a very long time. Diane could see the tiny silhouette of her daughter drawing. “Look, Mommy, I made a pretty picture for you!” She had just smiled at her and said it was nice; she was too busy to take notice. Tears streamed down her cheeks as she went into the master bedroom and reminisced about the day they’d bought the house.

“I hate this bathroom, Gary,” she’d told him. “It’s ridiculous.”

“I know, hon, we’ll get it fixed right away,” he’d promised. That never happened.

Not for the first time, and certainly not for the last, she said, “Gary Montrose! I hope you’re rotting in hell!”

Posted by Denise Moncrief at 1:30 AM 2 comments:

Okay, just right off the top let me say I don’t believe in ghosts. Unequivocally. Without hesitation. So why have ghosts been on my mind the last few weeks? I’ve been watching a lot of Ghost Hunters International on Netflix lately, and I’ve been reading Karen White’s Tradd Street series. I just finished The Girl on Legare Street and look forward to reading The Strangers on Montagu Street. While I was in Colorado, I saw three ghost towns and posted some pictures here.

Because of all this “ghostly” activity, my muse keeps whispering in my ear, distracting me with a bunch of what if scenarios. Now I must write.

I wrote a ghost story not long ago that Still Moments is publishing in the October anthology, Haunted Shadows. Sometimes I write a story and at the end I want to know what happens to my hero and heroine next. That was the case with Bo and Liza from Ghost in the Garden. Bo’s business is called Bo’s Paranormal Extermination Service. With that set up already in place, I keep hatching sequels to their story.

Ghost in the Garden had flying books and strange noises. The Girl on Legare Street had full-bodied apparitions and spiteful spirit beings that would choke the main character. The ghost towns in Colorado? Yep, all three of them were sleepy, peaceful, abandoned mountain towns. I didn’t hear a single disembodied voice. No need for a digital recorder to catch the electronic voice phenomena. There wasn’t any.

Whether you believe in ghosts or not, Ghost Hunters is a fascinating show. The producers go to a lot of trouble to prove the paranormal. Just far enough, but not too far to suspend disbelief for the less than ambitious debunker…or to lose the entertainment value of a reality show. I’ve read a lot of posts and watched a lot of YouTube videos about debunking the show’s claims of documenting paranormal activity. After all those episodes, you’d think they would have captured more than grainy quality pictures of abnormalities or distorted recordings of sounds that might be voices. Why does their camera crew point their cameras at the investigators instead of the space being investigated? You’d think the camera crew would have caught something after years of traipsing around the world filming haunted mansions, prisons, hotels, and insane asylums etc. Despite the questionable, easily dismissed methods of the investigators, the show is still fun to watch.

Real life is so much different than fiction. On GHI the only ghostly experiences the investigators encounter are the occasional weird shadow zipping from left to right and frequent generously interpreted “voices” on digital recordings. Even in the paranormal television series the encounters are less than obvious. In Karen White’s books, the ghosts are so real the main character couldn’t avoid them if she tried…and she did try. White’s ghost stories are a fun read, but I don’t take any of the ghostly occurrences seriously. There appears to be a fine line between the seriousness of a movie like Ghost and the blatant spoofs of a movie like Ghost Busters. At what point does the reader/viewer start viewing the plot as humor rather than drama?

So what is the appeal of the paranormal and why am I so inclined to write about it? Maybe it’s the fascination of peeking behind the curtain that veils the visible realm. Capturing a glimpse of the spiritual realm. Going beyond what’s considered normal into the paranormal.

So…do you believe in ghosts?
Posted by Denise Moncrief at 1:00 AM 1 comment: