All About Heroes - Author Interview With Jan Romes 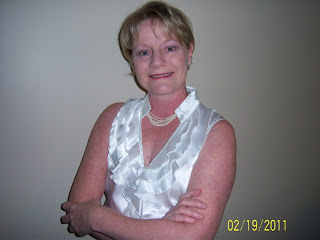 I am so happy to have Jan Romes with me today. One night on Twitter, Jan Romes and Sandy Owens were busy drooling, twitting, and tweeting over the men of NCIS. That was something I could easily relate to, so I tweeted my way into their droolfest, and that’s how I met Jan. So on with the interview...

First, tell us a little about yourself.

Thanks for having me on your blog today, Denise!

Let’s see, a little about myself…

I’m a shy person by nature, but life keeps pulling me out of my shell in one way or another (and that’s a good thing). I enjoy writing humorous contemporary romance, but I love to read all genres. When I’m not creating stories, I can be found working as a part-time fitness instructor or gardening. But enough about me, let’s talk heroes!

Each hero has a special place in my heart, but if I had to pick the one that stands out from the rest it would be ‘Kiptyn Thomas’ from my book One Small Fib. Kiptyn grew/changed the most. He was a billionaire who got a rush from making money; it was his world…until he met Allie Blue. (I still get excited about this love story!)

I think we fall in love with each hero we write. They represent bits and pieces of the men in our lives. I think I had a crush on Jared Kelly from Kiss Me. He’s a handsome cop who understood Lacy Goodlow better than she understood herself. For a guy to  understand you, to really ‘get’ you, is incredible!

Once I figure out my story line and my heroine, the hero is easy to develop. I have to know her before I can know him. (Does that make sense?) I can easily picture him from that point, and I have a pretty good idea where I want his character to go.

I love heroes with quirks; gives them depth, makes them real. For Kiptyn Thomas in One Small Fib he had to deal with a touch of OCD. In Lucky Ducks, Kasen Isaak had a mild case of dyslexia.

To name my hero, I consider who he is (i.e. billionaire bachelor) and his personality --- Kiptyn Thomas, III, says wealth/old money. Tough, but loveable – Jared Kelly.

My favorite hero at the moment is from television: Leroy Jethro Gibbs from NCIS!! Sexy, in-charge, but flexible! (Tony Dinozzo runs a close second – great sense of humor)

My husband! He’s loving, supportive, and laughs at my jokes! (He ‘gets’ me!)

My recent release is Kiss Me. It was published by Champagne Books on 4/2/12. My hero is Jared Kelly; handsome cop and all-around good guy, who has to deal with a dysfunctional family just like my heroine, Lacy Goodlow.  The way he handles his situation and Lacy’s, makes you like him straight away. 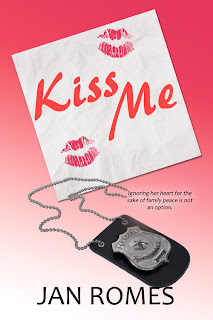 Falling for the cop who wrote her a speeding ticket and dated her spoiled stepsister throws Lacy Goodlow’s world into chaos, but ignoring her heart to keep the peace is not an option.

“Sir, seriously,” she whimpered. “I haven’t been drinking. And I need to get going.” She held her wrist up so he could see her watch. “My sister’s bachelorette party has already started, and if I don’t get there soon, she’s going to blow a gasket.”

Crap. He was picturing the same thing she was—drunken women and lots of alcohol.

Regardless, she was late. Lacy blew out a weighty breath of frustration, and contemplated making a move for his gun or handcuffing herself to his cruiser; anything so she wouldn’t have to face the wrath of Angela.

Deputy Kelly’s first command was for her to walk a straight line. Ha! Her sandal teetered on a stone and she swayed sideways. Next, touch the end of her nose. The earth must’ve shifted, because she missed and almost jabbed herself in the eye. And because of the diet cola she’d downed on the way there, she was fidgeting all over the place. “Are we done?”

Without answering the question, he leaned forward and took a big whiff.

An involuntary prickle of pleasure pulsed through her.

“I’m not going to administer the breathalyzer because your eyes aren’t glassy or red, your speech is not impaired, and I don’t smell alcohol on your breath.”

Duh. He’d been sniffing for alcohol, not enjoying her perfume.

She mumbled a feeble thank-you, but it was drowned out by a car filled with teenagers who buzzed past and hollered “Strip-search her.”

You can buy Kiss Me at the following link: Champagne Books

Kiss me sounds like a fun read, Jan. I'll have to get me a copy. Thanks for being here today.

Posted by Denise Moncrief at 7:49 AM