A Few of My Favorite Things

Here it is halfway through another year, and I wonder where the months went and what have I accomplished so far this year. It’s been a busy year already. I knew it would be. The first four and a half months were spent doing tax returns for other people. I barely got mine filed on time. As an accountant, I find the thing I like doing least is my own accounting. I hate reconciling my bank account, and I detest doing my own taxes. I can do that for other people, but mine seems to languish. Truthfully, I haven’t reconciled my bank account in months. That’s really bad since I’ll roll my eyes when one of my clients does the same thing.

When I started thinking about all the stuff I’d have to take care of this year, I panicked. Will I have any time to do something fun?

After reflecting on everything I have to get done this year, my head starts to hurt. I need some down time, I tell myself. With a heavy sigh, my mind turns toward a few of my favorite things. (Thank you very much Julie Andrews and The Sound of Music.)

SO here it is. A list of a few of my favorite things (not necessarily in any kind of order):

1.     Tex-Mex food – I could seriously eat Tex-Mex three times a day. Here is a picture of my favorite cheese enchilada recipe. 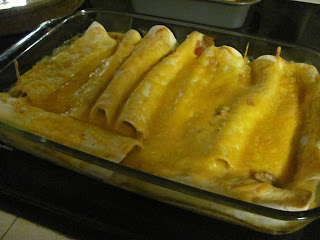 You can find the recipe in  my original post about it here.

Read more »
Posted by Denise Moncrief at 9:09 AM No comments:

Tired of keeping secrets that could get her killed…

As long as Courtney lived with Jared Crenshaw, she was able to keep his secrets and stay alive, but now that he’s dead, what she knows could get her killed. Hiding from the good guys can be just as dangerous as running from the bad guys.

Protected by a man who seems too good to be true…

Just when she thinks she has nowhere left to run, an investigator with the Arkansas State Police helps her find a new place to hide. Shaw Bennett seems to be everything Jared wasn’t, but can she trust him? He is, after all, just another cop.

Her life threatened by the father she never knew…

Shaw’s Landing seems a great place to disappear for a while until the night terrors begin. Are the visions she sees her imagination, the product of her increasing fear, or something more sinister? Has the curse of Haskins blood followed her?

Can the promise of love overcome the ghosts of the past at Shaw’s Landing?

Courtney Crenshaw’s eyes popped open when the squeak of rusty hinges woke her from a restless sleep. She rolled off her makeshift bed, scrambled to find a place to hide, and managed to wedge into a tight recess in the wall. Across the dimly lit room, Lucy Kimbrough backed through the door to the tunnel.

To Courtney’s horror, Lucy was dragging a body. A limp body.

A thin red line sliced across Caroline Grayson’s throat and splotches of crimson decorated Lucy’s shirt. Caroline’s long blonde hair dragged the ground, picking up debris from the dirty floor. When Lucy shifted her weight, Caroline’s head flopped to the other side, and it seemed her glassy eyes stared straight at Courtney.

A scream lodged in her throat and stuck there. Witnessing Lucy doing something insanely criminal was the worst place in the whole world to be. If Lucy caught her watching, Courtney was a dead woman. Actually, she might be a dead woman anyway. Courtney was probably the only person in Hill County that could link Lucy to Jared Crenshaw’s murder and now it appeared Lucy had murdered Caroline Grayson as well.

Courtney froze, barely inhaling shallow gulps of oxygen. The heavy air in the underground room made it difficult to breathe even when she wasn’t freaking out and afraid for her life. She glanced toward the door and calculated her chances of making a break for it without Lucy catching her. No, Courtney had to wait her out and hide in the shadows. Thankfully, Lucy seemed oblivious to anything except dragging Caroline. If Courtney waited long enough, maybe Lucy would leave and never know she had been there.

She pressed her hand to her chest and tried hard not to move even one twitch. Across the semi-dark room, Lucy popped a latch and a door swung open. Courtney had only been on the other side of the door once. Behind it was a set of stairs that by-passed the first floor and climbed two flights to the second floor of Victoria House. A system of hidden passageways began at the top of the stairs. Someone who knew how to navigate them could watch undetected whatever was going on in any bedroom of the house.

Alfred Hamilton had obviously built the house in such a way that he could spy on his guests. Courtney had heard stories all her life about the Baron of Hill County. He had been the crime boss of his day and had controlled liquor distribution and gambling in northern Arkansas during the days of prohibition, and someone had hated him enough to kill him in his sleep. The story went that he and his wife were murdered in the 1920’s. Some said his ghost haunted the halls of Victoria House. Some said his wife haunted her bedroom. Others claimed that Victoria Hamilton strolls along the edge of Lake Jefferson looking for a lover that never appears.

Courtney shivered when she considered all the ghost stories she’d heard about the house over the years, then wrapped her arms around her middle, and rubbed her skin where chill bumps had formed.

Across the room, Lucy tugged Caroline toward the open doorway to the enclosed stairwell. Dragging Caroline’s body upstairs seemed like a lot of hard work. Wouldn’t it have been easier to dig a hole and drop her into the ground somewhere in the unfinished portion of the basement or to dig a shallow grave out in the brushy woods that covered most of the grounds around the house?

Lucy stopped, jerked once, and turned to scan the basement room as if she’d sensed another presence. Courtney wedged further into the recess in the wall. Her hiding spot was too small for her to fit comfortably. Actually, it was a thin crawlspace between two walls that hadn’t been sealed off properly rather than an intentional recess in the wall. If she tilted her head at just the right angle, she could observe what Lucy was doing and possibly go unnoticed.

She swatted at the back of her head as if something was messing with her hair, but no one was in the room with her except Courtney and the dead woman. Lucy’s actions weren’t making much sense, but then, she often acted psycho.

Lucy dropped Caroline’s feet and knelt beside her. “We’re almost there, Caroline. You wanna sleep in Victoria Hamilton’s bed, don’t you?” Lucy leaned closer to the dead woman, her lips near Caroline’s ear, which seemed kind of ridiculous since Lucy wasn’t whispering. “How much you wanna bet that Tori Downing has done it with your husband in that big ole bed?” Lucy let loose vicious cackles that could have brought a corpse back from the dead.

But Caroline was good and dead. The woman wasn’t going to resurrect.

“I didn’t do this for them, you know. I did this for Josh. It’s my gift to him.” The woman shook her head at Caroline as if outdone with a misbehaving child. “You should have never come back to town. Everyone tries to take him away, but he belongs to me.”

It was sick enough the woman was having a one-sided conversation with a corpse, but she was also saying stuff about Josh that wasn’t true. Josh would never belong to Lucy. Josh didn’t belong to anyone.

Lucy hooked her arms around Caroline’s ankles, rose to her feet, and began dragging the dead weight behind her again. “When I’m done here, I have one more thing I need to do.” Lucy huffed as she and Caroline disappeared through the door.

The clunk clunk of Caroline’s head hitting each tread of the stairs as Lucy made her way higher and higher caused every one of Courtney’s taut nerves to jump. She moved to the open door and listened.

Lucy’s deranged voice filtered down to her from the landing above. “I’m gonna find Josh, and I’m gonna make him tell Courtney the truth.”

What truth? Josh had never lied to her. Not about anything that mattered.

I hope you enjoyed this snippet of Shaw's Landing. The book will be released mid-July and available for pre-sale soon. Sign up for my newsletter to find out when the book goes on pre-sale. The subscription form is at the top left corner of this blog.

While you're waiting, please check out my other books available on :

Posted by Denise Moncrief at 8:42 AM No comments: