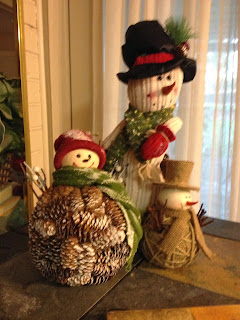 This adventure began year before last. My daughter and I wanted to experience together the annual American celebration of gross consumerism called Black Friday. She had never before done Black Friday (or BF as we now affectionately refer to it), but my daughter had finally come of age and it was time for her introduction to this important rite of passage. We are, after all, Olympic quality shoppers. Doubt our status as shopping athletes? One of our favorite things to do as mom and daughter is to drive many hours from our home to revel in the shopper’s paradise that is known as Dallas, Texas. Northpark Mall at Christmas is the closest thing to shopper heaven...if you can find a parking place.

Anyway, I digress. Our experience the first year, 2011, (call it the nexus year) was a disappointing bust. We waited until we’d slept late the day after eating all that Thanksgiving food to rise from delicious slumber and venture out into the melee. Were we excited? Oh, yes we were! We hit the stores around noon rather than at midnight. By then, the raging storm of shopping activity had dulled to a gentle breeze. The stores had even picked up and straightened up their merchandise. We spent our time wandering from store to store in search of Black Friday hysteria. In our desperation, we finally hit upon the idea of going to Toys R Us. The toy store had to be where all the manic shoppers were congregating. Surely, there was a toy that every child under the age of twelve must have this year, but even TRU was woefully peaceful. There were no more shoppers there than on any given Saturday. This wouldn’t do. We were looking for chaos. We wanted the adrenaline rush of being part of the crowd. We would do it different in 2012. We would venture out at midnight when all the best sales started.

So... when November 2012 rolled around, my daughter and I put on our big girl panties and hit the stores at midnight. We were so proud of ourselves. We thought we were brave. We thought we’d experience a new kind of shopper’s high. We thought surely 2012 would be the year we were one with the shopping universe. To our delight, the amount of traffic reminded me of Christmas Eve when it falls on a Saturday. Our pulses raced with excitement. We hit one of those big box chain stores first, and yes, yes, yes, there were crowds waiting in line to purchase a television that was on sale. I think our local store ran out shortly after midnight. Apparently, people will stand in line in the freezing cold hoping to be one of the lucky ones. We didn’t do that. We didn’t need another television. Not in 2012 anyway. We darkened the portals of numerous retail establishments that night. We studied discounts (yeah, I know, the “retail price” is marked way up so the store can mark it way down on BF), we chose our items, and we stood in line. And stood in line. And stood in line. We arrived home with our purchases about three in the morning and collapsed in bed. When we finally woke up, we wondered what we had purchased the night before that was worth the aching feet in the morning. More lessons learned. We would do it different in 2013. We wouldn’t stand in line at Kohl’s, no matter what great sales they had going.

So here we are, November 2013. My daughter and I have survived another BF experience. We wore comfortable shoes, we selected our stores carefully, and we shopped. We had one rule this year. Do not stand in a long line unless we are holding something in our hands that we absolutely cannot live without. As we meandered from store to store, we realized there was NOTHING a person could buy that was worth standing in line that long, so we ditched the cute little snowman trio and left Kirkland’s empty handed at nearly two in the morning. We had an arts and crafts day planned mid-morning with my daughter’s boyfriend’s mother. We needed our rest, so we could craft. We headed home and collapsed into bed. Next year, we will do it differently. We’ll sleep late and venture out at three in the afternoon. After all, it’s not about the deep discounts; it’s about the shopping.

But my story isn’t over... I ended up with the cute little snowman trio anyway. My daughter and I went home, got some sleep, and went back out at three in the afternoon. There was only one of the taller snowman left at Kirklands. I checked out the scene. The lines were much shorter in the light of a day. The snowman trio and I came home together yesterday.

Ah, my friend, I’ve learned much from shopping on Black Friday, and when I figure out what I’ve learned, I’ll...um... Yeah, I’ll get back to you on that.
Posted by Denise Moncrief at 5:09 PM