Confessions of a Ghost Story Addict

I have an addiction. I’m fascinated by ghost stories. Now, I’m gonna say right off that I believe in the supernatural. I believe there is an unseen realm that isn’t visible to the human eye, but whether or not the supernatural manifests in the form of apparitions… Well, I’m a skeptic. However, my skepticism doesn’t keep me from being fascinated.

For my thirtieth wedding anniversary, my wonderful husband, Larry, reserved us a room at the Excelsior Hotel in Jefferson, Texas. Although the wonderful group of philanthropic ladies that own the hotel don’t want to talk about it, ghost stories surrounding the old hotel abound.

Probably the most popular ghost story in Jefferson is the haunting of Diamond Bessie. Here is a condensed version of what Wikipedia said about Diamond Bessie.

Diamond Bessie was a prostitute who was murdered in the woods outside Jefferson. She was shot in the head in the early afternoon of Sunday, January 21, 1877. Her accused killer was her lover Abraham Rothschild.

She was apparently good at her chosen “profession” because her male admirers showered her with gifts of diamond jewelry, thus the nickname Diamond Bessie.

Bessie worked in brothels in Cincinnati, New Orleans, and finally Hot Springs, Arkansas, where she met Rothschild. She was pressuring Rothschild to marry her and his reluctance to legitimize their relationship may have been what motivated her murder.

Their relationship was reported to be tumultuous, marred by alcoholism and physical abuse. There are claims that Rothschild forced Bessie to prostitute herself during their travels together. In Cincinnati, Rothschild was arrested for beating her, and she accused him of trying to steal her diamonds. In January 1877, the couple registered at the Brooks House in Jefferson, Texas, as “A. Munroe and wife.” Their fine clothes and Bessie's diamonds impressed the locals.

On the morning of January 21, Rothschild bought a picnic lunch, and the couple crossed the bridge at Cypress Bayou and left town walking along the road to Marshall. It was noted by a witness that she was wearing her diamonds when they left town. About three hours later, Rothschild returned to Jefferson without Bessie. When questioned, Rothschild claimed she had stayed with some friends across the Bayou. The following morning, he was seen eating alone and wearing Bessie's rings. On the morning of Tuesday the 23rd, he took a train to Cincinnati, carrying Bessie’s luggage with him.

Her body was found February 5, fully clothed, and absent her famous jewelry. The remnants of a picnic lunch were still scattered about. After an investigation into her death, Rothschild was extradited to Texas to stand trial for the murder of Diamond Bessie Moore. It was Texas' first big murder trail. The case finally went to trial in December 1878 in Marshall. Rothschild was convicted, but the conviction was overturned on appeal.

No, we didn’t see the ghost of Diamond Bessie while we were in Jefferson. In fact, we didn’t see any ghosts at all. Although we stayed in the Lady Bird Johnson room at the Excelsior Hotel, we didn’t even get the “feel” there was anyone in our room besides us. Of course, most of the stories coming out of the Excelsior centered around the Jay Gould room that was next door to our room.

I did see some “ghostly” looking trees along the Bayou near Jefferson. Check out the picture below. I think I could set a horror story in that swamp. 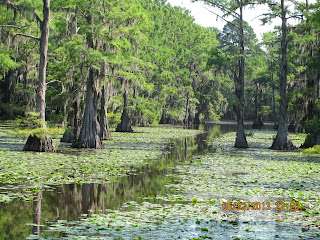 I’ve been so fascinated by ghost stories that I’m writing one entitled The Unmistakable Scent of Gardenias. This book is set in an old run down plantation house in south Louisiana. The owner is refurbishing the old home to its former splendor, but not without the renovations stirring up some paranormal activity. If you love a good ghost story, I think you’ll love this book. Here’s an excerpt to whet your ghostly appetite.

She slipped into the wide upper hall and across to the bathroom. Moonlight slithered through an uncovered window, sending rays of soft light across the floor and up the far wall, making her cotton nightgown glow bright white. With her heart in her throat, she turned the knob, cracked open the bathroom door on squeaky hinges, and wiggled inside. Before she could take another breath, she had dropped to her knees and was retching into the stained toilet bowl. Her whole body trembled as she leaned on the porcelain that wasn’t quite bolted tight enough to the rotting floorboards.

When she flushed, the foul remains of her supper didn’t swirl all the way down. She didn’t want to flush again, but she had no choice. If she didn’t, Les would know about her weak stomach. How could she tell her husband that intimate relations with him made her vomit?

She waited until the tank refilled and flushed again. The pipes in the old house groaned enough to wake the dead. She rose slowly on shaky legs and turned the tap. A sludge of dirty water gurgled from the corroded faucet. She used some of the nasty mess to wipe the evidence of her shame from her mouth, careful not to slosh the dirty water on her clean gown. How could she get the sick taste out of her mouth? She didn’t dare drink any of the putrid water spurting into the sink.

She spit into the toilet bowl until her mouth went dry. Her eyes watered from the physical strain of throwing up and the fear of being caught. When she lifted her head to the mirror over the sink to determine if she still looked presentable, she shrieked and then slapped a hand over her mouth.

The face reflected back at her was not her own. She pivoted to look behind her, but there was nothing but a blank wall. When she turned to face the mirror again, she saw her own face. There was no mistake. She’d seen someone else’s reflection. Who had she seen in the mirror? Why was the woman crying? Why was there a look of abject terror on her face? And why was she covered in blood?

Until The Unmistakable Scent of Gardenias released, please check out my published books on my Amazon author page.

Have you heard the legend of Diamond Bessie Moore? @dmoncrief0131 Click here


I would like to spread the joy of reading this holiday season to one lucky grand prize winner chosen at random by Rafflecopter by giving away at 11:59 pm CST on December 31, 2013 a
Brand New 8gb 7" Kindle Fire HD

How do I enter you ask? There are several ways to enter. Leave a comment on this post. Follow me on Twitter, Facebook, Goodreads, or Google+. Purchase or leave a review on Amazon or Goodreads of one of my books. Use the Rafflecopter below to record your entries! Good luck!

a Rafflecopter giveaway
Posted by Denise Moncrief at 1:00 AM